Balanced Literacy: An instructional bricolage that is neither fish nor fowl

It is sometimes tempting, in the field of early literacy instruction, to think that progress has completely stalled, and any real hope of lifting literacy levels in Australia (and similar western nations) has slipped through our fingers. So, to start with the good news: it is pleasing that we seem to have some level of agreement that there are many pillars of early literacy that require focus in the first three years of school. Researchers and practitioners at pretty much any point on the “Whole-Language – Phonics” continuum (and I do believe it is a continuum rather than a dichotomy) affirm the importance of the so-called “Big Five” (phonics, phonemic awareness, vocabulary, comprehensions, and fluency). That  said, an Australian education professor last year appeared to challenge this consensus, going so far, in fact, as to argue that a focus “solely” on the Big Five elements could be “damaging” to some children. In the absence, however, of any evidence to support the astonishing contention that a focus on these elements does actual harm to children’s reading progress, I think we can assume that they constitute a good and widely agreed-upon basis for classroom reading instruction.

However, it is not enough to just put all the elements into a metaphorical blender and hope for the best. In this sense, so-called “Balanced Literacy” (BL) might be better termed “Blended Literacy” – all of the elements outlined above are in there somewhere, but the literature describing them in the context of BL does not advocate that they are treated in a systematic, sequential way.

Perhaps this stems from a lack of an agreed definition of BL.  In my search of the literature, I found (e.g. see Rasinski & Padak, 2004) various and varied references to a “compromise position” between Whole Language and phonics, the importance of “multiple literacies”, BL as a “radical middle”, the adoption of “principled pluralism”, a “new consensus in literacy education”, and statements such as

“…. balanced literacy becomes a recognition that language and literacy theories and practices need to be ‘answerable to concrete others’" (Heydon et al., 2005, p. 313).

Now, I do not know exactly what “concrete others” means, but if it is another way of talking about accountability, then I am on board with it.

Wren (2001) observed that “A balanced approach could be generically described as ‘mixing some Phonics with Whole Language,’ but how this is accomplished in any particular classroom is unclear” (p. 4). Another BL researcher (Mermelstein, 2006) further highlighted this lack of definitional clarity thus:

“Often when I visit schools and ask teachers to describe their curriculum to me, they’ll say that they do “balanced literacy.” I often ask them what they mean by “balanced.” The answers I get are varied. Their varied answers don’t surprise me because as I worked on this article I discovered a variety of views as to what the word balanced in “balanced literacy” actually means”.

So - one basic problem with BL is its lack of a robust, agreed-upon definition.

I wonder then, how many beginning teachers would find this take on BL of practical value when they enter an early years’ classroom:

“The version of balanced literacy that we espouse …. cautions educators about the slipperiness of subjectivities, power relations, and the inability of an abstract theory or practice to adequately control, predict, or define the needs of a classroom of students and as such insists that all theory and practice be situated within the relationship between teacher, student, time, and place” (Heydony, Hibbert & Iannacci, 2004, p. 313). If anyone can tell me what this actually means in relation to the task of teaching children to read, I am all ears.

Another notable absence in the BL literature (this 2006 piece by Starrett comes close though and please update me if I have missed something), is discussion of the fact that there are different approaches to phonics instruction, and they are neither synonymous nor inter-changeable. Analytic, incidental, and embedded phonics align more with Whole Language (whole-to-part analysis) than to approaches such as systematic synthetic phonics that emphasise part-to-whole analysis for beginning readers (see this link for more information).

In fact, the frequent use of the word “eclectic” in the BL literature is the big clue as to what is really going on in many early years’ classrooms. Eclectic has a meaning that is diametrically opposed to systematic. This eclecticism, when coupled with Kenneth Goodman-esque “teachers should be left alone to decide what’s best for children in their classroom” means that BL is really an Alice-in-Wonderland term that can mean pretty much exactly whatever the user wants it to mean. As has been noted elsewhere (Bingham & Hall-Kenyon 2013; Bowen & Snow, 2017) this creates one of the challenging (some might even say clever) aspects of BL from a research perspective – how do we evaluate something that is likely to look very different from one early years’ classroom to the next? Normally, fidelity of delivery is a cornerstone of intervention evaluation, but we can’t establish fidelity if the intervention itself is, by design, open to interpretation by those who implement it.

All of this would, of course, be a moot point if we were doing a better job of getting more children across the bridge to literacy in the first three years of school. But we’re not.

My read of the BL literature also highlights a confusing and disproportionate emphasis in many BL publications on “higher-order” processes (synthesis, analysis, metacognition), while simultaneously overlooking the lower-order skills that need to be in place (i.e. need to be taught) to free up cognitive resources in order to support such processes. Take for example, this 2008 paper, accessible via the Australian Literacy Educators’ Association (ALEA) website. Its author (Cozmescu) refers to the use of a “bricolage" of classroom practices, but makes no reference to phonics instruction as a teaching approach, despite referring to decoding as a strategy that children might use when participating in activities that respond to the question “How will I ensure that this week’s literacy program will include all of my students”? How indeed. And how do children call on a strategy such as decoding, if they have not been taught it?

It is also interesting to read the views of proponents of BL on its historical roots. For example, Manset-Williamson, and Nelson (2005, p. 59) observed that “Influential within the debate over explicitness of strategy instruction are Fountas and Pinnell (1996), who have argued that strategies cannot be directly taught. Instead, they propose that teachers provide rich literature experiences for students so that reading strategies can be naturally constructed with teacher support, but not explicit instruction”.

Did you catch that? “Strategies cannot be directly taught”. Many readers will be aware of course, that Fountas and Pinnell are the authors of the hugely popular and widely used (in Australia at least) levelled readers based around predictable text that encourage guessing rather than decoding as a first-line approach for beginning readers. Their advice flies in the face not only of decades of cognitive psychology research, and the findings of three national inquiries into the teaching of literacy (USA, Australia, and UK), but ironically is also at odds with published statements by some other proponents of BL. For example, Rivalland (2000, p. 2), referred to “Explicit instruction in code-breaking techniques, which include phonological awareness, letter recognition, letter-sound correspondences and sight word recognition” - in spite of the fact that Fountas and Pinnell said that reading strategies cannot be directly taught. Notably, Rivalland still stops short of reference to initial systematic, synthetic phonics as the preferred approach to teaching decoding skills, but I think readers can see just how confusing and contradictory the BL landscape is.

Offering eclectic, only partially targeted instructional approaches as a means of meeting the diverse needs of early learners seems an odd vehicle for a pedagogical approach that has the word “balance” in its name. It’s somewhat akin to using a butter knife to slice a piece of rump steak: it superficially looks like an implement that might be fit for purpose, but in practice offers only a blunt interface with the task at hand.

Thankfully the Five from Five  project offers a means of redressing some of the gaps and inconsistencies outlined above. It is based on the agreed evidence that children need teachers who can draw together processes in phonics, phonemic awareness, vocabulary development, comprehension, and reading fluency, but value-adds these by positioning systematic synthetic phonics instruction as a first-line approach, and provides resources to teachers and parents to support this. This is an important refinement that is sorely lacking in current conceptualisations of BL. It also neatly gets past the problem of phonics being the only one of the Big Five that needs to “justify” its existence as a pedagogical pillar.

There is perhaps a perverse reward for lack of systematic early reading teaching in the fact that many children will cross the bridge to literacy almost irrespective of the pedagogical focus in their classroom. Such children enter school with a range of bio-psycho-social advantages that set them up for success. This position was well-summarised by Konza, who observed (2014, p. 160)

"It is true that some children readily acquire the skills of independent reading without highly explicit teaching, but if balanced is interpreted as offering all children only an embedded rather than an explicit approach to phonics instruction, those most in need will be further disadvantaged".

So we cannot expect to see improvements in the performance of children in the tail of the achievement curve unless and until teachers are equipped to teach children who start from behind and require explicit, systematic teaching if they are to have any chance of catching up, let alone engaging with the higher-order language-based literacy activities that await them across the curriculum.

Compromise is a wonderful thing, in its place. But we should not be compromising on translating scientific evidence into classroom practice. It is not enough to offer children (especially those starting from behind) an eclectic, bricolaged, blended literacy program that fails for want of a simple early emphasis on explicit and systematic synthetic phonics instruction, and then to classify such children as “special needs” when they inevitably and completely predictably display low literacy skills by mid primary school years. This is simply amounts to another way of describing Dr. Reid Lyon’s “instructional casualties”.

That’s not fair to teachers or students, and it’s most certainly not what I call "balanced". 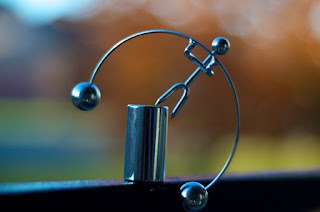 POSTSCRIPT, October 2019: I recommend the explanation at this link (courtesy of Education Week) as to how BL and effective phonics instruction differ from each other.

Rivalland, J. (2000). Finding a balance for the year 2000 and beyond. Newsletter of the Australian Literacy Educators' Association, February. https://www.alea.edu.au/documents/item/62