In a blog-post back in December last year I shared an image of a "Language House"  that I often use in professional development sessions with teachers.

As a result of a recent very enjoyable after-dinner discussion with Sally, a Speech-Language Pathologist  in Madison, Wisconsin, I've slightly modified this, to take in the importance of such "houses" being built on solid ground - in this case, the social contexts and purposes for language use in the real world.

I have pasted the updated image below - I think it will make our house both more solid and better able to resist a metaphorical force-10 gale, whether academically or socially. 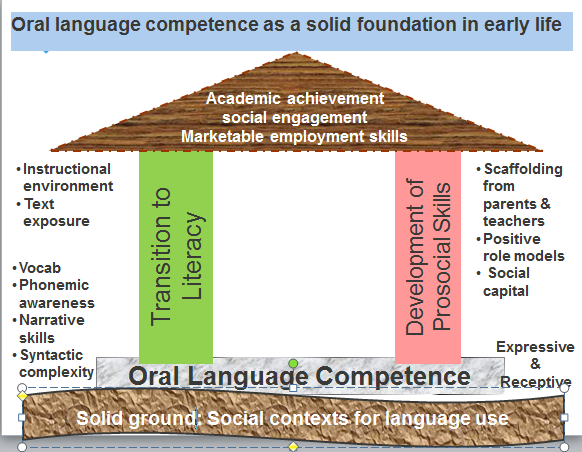 Language skills and the social gradient 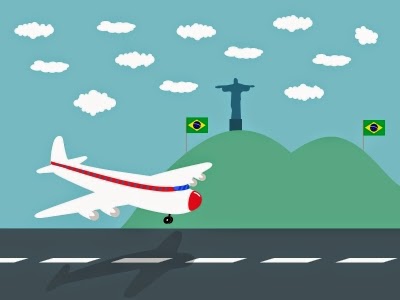 I have recently returned from a very busy 5-week overseas trip as part of my sabbatical leave this semester. This trip enabled me to visit a small handful of researchers and academic departments whose interests intersect with mine with respect to language development/disorders, early literacy instruction, and psychosocial aspects of being an adolescent with a language-learning disability. I spent most of my time in the UK, but also had some time in the USA, the latter predominantly dealing with issues pertaining to language competence of young people in the youth justice system.

My trip provided some wonderful opportunities to reflect on contemporary issues and challenges pertaining to the language-learning impairment field, and to consider ways in which current research agendas in various centres are tackling different aspects of some of the “big questions” of our time.

For me, one of the most compelling issues for researchers, policy makers, and practitioners is the social gradient that exists with respect to early language exposure, and to language skills and academic success during the school years (and no doubt beyond, but data is lacking on this). 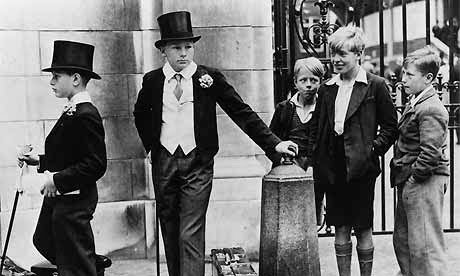 Many readers of this blog would be familiar with the work of Hart and Risley in the USA in the mid 1990s. In a nutshell, these workers recruited 42 families who were stratified across three layers of socio-economic status (SES) spectrum – parents from professional backgrounds, those from working class backgrounds, and those who were recipients of state welfare. At the outset of the study, these families had an infant who was 9 months old, and over a period of 36 months, Hart and Risley tape-recorded an hour per month of child-directed parental language. Their quantitative findings are summarised in the figure below, however it is must be noted that there were important qualitative differences across the SES spectrum too. Most notably, children of professional parents tended to experience parental language that was more encouraging, and they also received more expansions and elaborations on their utterances. 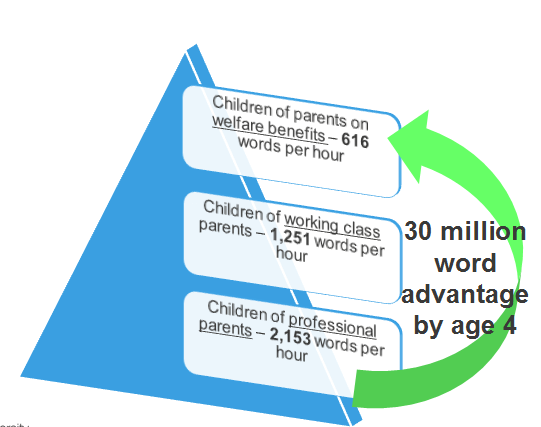 Although Hart and Risley’s work in this area is probably the most well-known, it’s important to note that similar findings have been reported by other workers as well, e.g. Hoff (2003), Locke et al. (2002), Spencer et al. (2012), and Weisleder and Fernald (2013). Also, it must be remembered that of course some families who are struggling economically never-the-less have the human and social capital to provide linguistically enriching environments for their children. Conversely, some high-income families struggle in this regard. So SES correlates with, rather than determines the nature of the verbal input that children receive. Studies such as these are not about "parent-blame", irrespective of the fact that the tabloid media will mis-use them in that way from time-to-time. Rather, this line of inquiry is simply about being data-driven and then considering applications of the data - as should be the case in all social sciences research

In our work on young offenders, we have reported high rates of language impairment on formal testing, and of course young offenders as a group overwhelmingly come from low SES backgrounds. However we have also examined the language skills of non-offending controls from similar SES backgrounds and have found that in spite of being an average of two years younger, the controls out-performed their offending peers across the board on language measures.

So – low SES alone does not account for poor language skills in vulnerable young people; nor, incidentally, are such differences accounted for on the basis of nonverbal IQ. Other factors, such as chaotic family structure, disrupted education, and developmental comorbidities such as behavioural difficulties all need to be considered.

Perhaps language is not quite as robust to the effects of environmental disruption / deprivation as we might previously have believed.

What is inescapable, however, is the fact that there is a social gradient with respect to early language exposure and at least mid-range language outcomes such as academic achievement. Schools, teachers, clinicians and policy makers all know that some schools cater to communities that are economically and socially disadvantaged and this disadvantage manifests as lower achievement overall on tasks that require strong verbal skills. And it’s hard to think of many aspects of an academic curriculum that don’t require strong verbal skills.

However inescapable such a conclusion may be though, it raises many more questions than it answers, for example:

What is the basis of this gradient? Exactly what is it about being poor, and/or less well educated, that reduces the quantity and quality of language experiences made available to young children? Is this purely a social-environmental phenomenon that can be “rectified” by changing the behaviour of key adults in a child’s immediate networks?

Is it possible that what looks like a social phenomenon actually reflects an underlying, genetically transmitted disadvantage with respect to oral language skills? I am no expert on genetics (far from it!), but of course we must recognise that many human characteristics are genetically influenced, if not determined – e.g. height, body morphology, eye colour, skin tones, and so on. There is an established link between genetic factors and  language skills.  Is this link enough, however to account for a stratification of society with respect to capacities for acquiring and using language?

If the social gradient is biologically determined, is there any point trying to intervene to improve the life-chances of children with “deficient” language skills? A nihilistic view of the world would suggest that such interventions are unlikely to be beneficial and/or economically justified. The evidence on interventions such as Head Start (the USA) and Sure Start (the UK) is not exactly bursting with reasons for excitement over the benefits of targeting “at-risk” communities and providing a verbal “top-up” prior to school entry.

If a child comes from an economically disadvantaged community/family/school and has oral language skills that place him/her in a clinical range on standardised language measures, do we simply attribute the language profile to social circumstances? Can such a child also have what would, under other circumstances be referred to as a “specific language impairment” (SLI)? If the answer to the last question is “yes”, how do we determine which poor children have “language impairments”, Vs having language skills that are commensurate with their position on the social gradient, albeit woefully inadequate when it comes to academic and social success at school?

These are all big questions facing child language researchers, policy makers, and practitioners in speech-language pathology as well as education. These questions are also central to the current terminology debate concerning children with language difficulties.

My view is that while it is important for researchers to vigorously investigate and classify the various aetiological pathways that lead to compromised language skills, we cannot forsake the academic and social outcomes of large numbers of children simply because we know they are “poor”.  In fact, evidence would suggest that such children may derive particular benefits from rigourous application of evidence in the early years’ classroom. For example, a pilot investigation we recently conducted in Victoria suggests that targeting teacher knowledge and practice with respect to early oral language and literacy development has a direct and beneficial effect on the performance of children in disadvantaged schools. A larger scale investigation is now attempting to replicate this finding, and I hope I can report positive outcomes via this blog in due course.