Can we talk about NAPLAN?

I have avoided blogging about NAPLAN* until now, because I know it's a deeply divisive topic, and is one that can elicit some particularly impassioned responses from teachers, academics, and parents. I just did a quick search on the hashtag #NAPLAN on Twitter and as you can see, the result confirms that there's range of views on this important issue: 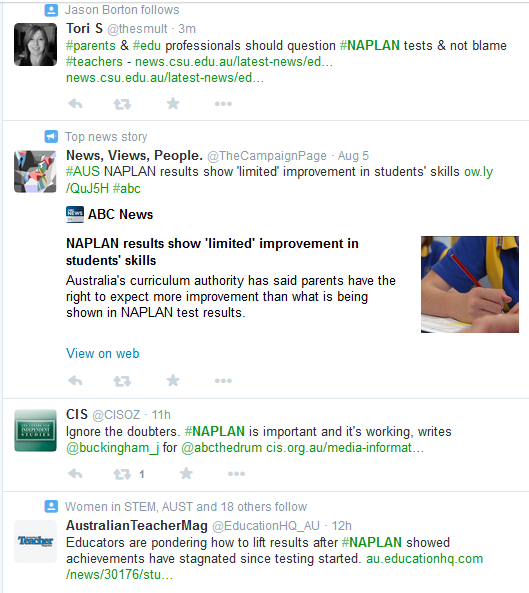 As with all divisive topics on which well-motivated people disagree, there's a number of issues that need to be fleshed out. To be clear, I am in favour of national testing, but that doesn't mean that I am blind to the need for some improvements.

I don't intend here to dissect individual stakeholder arguments one-by-one, but in general, here's some of what I've read and heard in recent days, and some thoughts in response:

We do need to keep talking about NAPLAN, but in ways that authentically put the educational interests of children ahead of professional vested interests. We would expect nothing less from colleagues in medicine, engineering and aviation, whose work also involves enormous trust on the part of the community. As I've said many times on this blog, the work of teachers is no less important than that of any of those other professions, and as such, we expect engagement with data from a range of sources. NAPLAN is but one of those.

Tweet
Posted by Pamela Snow | The Snow Report at 22:26